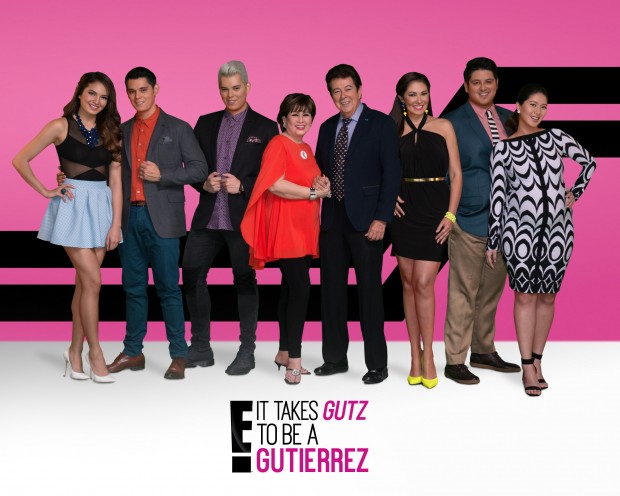 I’m not specifically a showbiz writer, but there is no doubt in my mind that show business has a big influence me. I love Filipino films, and I drag my husband (even against his will) every chance I get to see a movie once in a while. My Sunday afternoon is never complete if I miss my favorite entertainment show to get my healthy dose of the latest controversies inside showbiz, that’s at least two hours of colorful stories from the showbiz stars. And part of my sleeping regimen is to lull myself to slumber catching the latest round of inside info from the entertainment industry.

So why was I having a hard time deciding what to write for this article on Philippine showbusiness? Oh, I get it…there is simply too much to tell! But really, there was no contest. There is one special story on Filipino entertainment industry that captures the glitziness and that’s all about the Gutierrez family.

Running throughout Asia via the E! Channel is the show “It Takes Guts To Be A Gutierrez”. Partly family show, but based on a reality-TV model, this is a first of its kind in the Philippines. There must be really something funny with the Filipino psyche to embrace the concept of following a family on TV and gawking at both their simplicity and glamour. Every waking moment, every conversation and every small incident is on TV. Its Big Brother brought to you in family size. But this is not your ordinary family. They are considered as royalty in the entertainment world in the Philippines. So there’s no wonder their show is top-rating, with a back-story that runs decades, and a popularity that is the envy of many, even with the standards of showbusiness.

Even as a child, I was already familiar with the name Eddie Gutierrez. According to my mom, he was already famous in the Golden Age of Philippine Movies in the 50s and 60s. He was not just a hunk then. He was THE HUNK. Tall, mestizo and extra-ordinarily handsome with the almost perfect face, he could act, sing and dance the heavens away. He was (officially and literally, no kidding!) crowned “Elvis Presley of the Philippines”. Every Filipina actress begged to be paired with him in a movie. Even other actors at that time admitted he was their “idol”. Every movie he made was a sure hit.

His wife, Anabelle Rama was active in both movies and TV, and was considered one of the “goddesses”. They were a perfect pair. She had the beauty, the body but not so much of the grace. She was aggressive in tone and behavior for a Filipina, her brutal frankness earning her a title as a “dragon lady”. But Eddie was totally enamored of her. And so their love team in the film went the full distance, and they got married. And the Gutierrez dynasty was born.

But it wasn’t to be a fairy tale, not in the immediate time as stories go, anyway.

After their marriage, they decided to drop their acting careers and go to the United States. This sent shock and dismay to the entertainment industry in Manila. While in the US, their lifestyle had a dramatic change (pardon the pun). They weren’t the popular actors there. They were just ordinary citizens, trying to get by. They lived simply, and they recalled it was a struggle. They worked hard, and went into odd jobs. Any job, as long as it was legal work. There was even a time they went into selling cooking pots. But the hard times were also the good time, and the best ones were when they were blessed with six children there.

After some time, Eddie and Anabelle decided to go back to Manila and they brought the whole family back ? Ruffa, Elvis, the twins Richard and Raymond, Richie Paul and Rocky.

Eddie wasn’t expecting much of their return to the Philippines. In fact, he thought that the days of his stardom was already way gone by, and his fans would have forgotten him. He was also sure that movie producers would not be interested anymore to sign him or Anabelle for any film project, because they have been away for such a long time.

But destiny had other plans for him and his family.

First, the return of the “king” ? no less than the “Elvis Presley of the Philippines” himself ? was a big deal! His film and his acting were still legendary, and film critics and writers wondered if his return was a signal of a new age for Philippine showbusiness. His colleagues asked him to join in their film projects, and producers wanted him for his experience, his professionalism, his “acting presence” and his stature. Hell, even his name alone in the title poster would make a movie a potential hit. And he didn’t disappoint. Meanwhile, Anabelle decided to take a crack in managing talents or younger actors and artists, guiding them into the crazy and unpredictable world of the entertainment industry.
And the plot had a new twist.
The daughter Ruffa, was enjoying the limelight in Manila, something that was very different from her life in the US. She went into modeling, and it was perfect for her. She was the product of excellent breeding ? she had the height, the beauty, the poise and the character. She started out in a popular daily afternoon show showcasing young and emerging talents. But her heart was in modeling, and her career went very well, winning the 1992 Look-of-the-Year Philippine Title. Then in 1993 she became Miss Philippines-World and took the runner-up crown for the world pageant in the same year. Then the movies and TV projects was the natural course.

Meanwhile, the twins Richard and Raymond were also itching to try out their showbiz prowess. They started as child stars, and then went into hosting. Richard is well-known for taking on serious hosting and documentary work ? particularly on environmental issues and climate change.

In the Philippines, when you talk about families in showbusiness, there are very few who can keep up with the Gutierrezes. Their name is almost synonymous to acting and entertainment dynasty. And they continue to shine on. It must be really in their blood ? or in the genes at least. And they are never afraid to hear the words ? “lights, camera, action!”