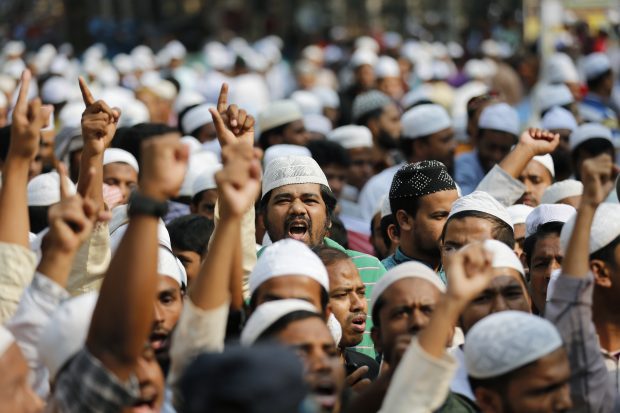 DHAKA (Bangladesh): While the persecution by Myanmar army continues in Rakhine State, thousands of Rohingya Muslims thronged the Bangladesh border in their attempt to infiltrate into this country for shelter. Hundreds of Rohingyas are floating in dozens of wooden boats in the Naf River at the border of the two countries. Para-military Border Guards Bangladesh (BGB) personnel are patrolling in the 52-kilometer long border river round the clock to resist the illegal entry of Rohingyas. However, several thousand Rohingyas have already infiltrated into Bangladesh territory through other routes at the hilly areas of Teknaf located at the southern point of the country.

Meanwhile Bangladesh Home Minister Asaduzzman Khan categorically said the Rohingyas will not be allowed to cross the border and those who have infiltrated will be pushed back to Myanmar. Worried over the influx of Rohingyas facing persecution in Myanmar, Dhaka has sought support from the international community for resolving the crisis. Bangladesh Foreign Minister AH Mahmood Ali made the call at a diplomatic briefing in Dhaka on November 24. Dhaka also voiced serious concern at the influx of Rohingyas to Bangladesh in spite of BGB’s efforts to stop it. The Foreign Minister expressed Bangladesh’s deep interest in helping the Myanmar government in all possible ways ? from addressing its security concern to contributing in the social reconciliation and economic development of the Rakhine State.

The persecution of Rohingyas started in Rakhine State, close to Bangladesh’s southern border, in the first week of October this year. Following attacks by unknown terrorist groups on Myanmar police outpost in Rakhine State that claimed 9 lives, Myanmar army cracked down on the Rohingya population. According to newspaper reports quoting UN sources, over 70 Rohingyas have been killed by Myanmar army while hundreds sustained injuries. Eight hundred houses of Rohingyas were torched and more than 30,000 people were displaced. Many Rohingya women were also raped by Myanmar army personnel, it was alleged.

A Bangladesh Home Ministry spokesman said Dhaka is sympathetic to the affected Rohingyas who were displaced. But Bangladesh, a country of 56,000 square miles having a large population of 160 million, cannot afford to give shelter to huge number of refugees from Myanmar. “The country is already over populated, we are not in a position to provide shelter to refugees”, the spokesman said.

Rakhine State in Myanmar is the home to over one million Rohingya Muslims. They have lived there for centuries. Once Burma (Myanmar) was the part of Indian sub-continent under British rule. At that time people from the Eastern part of India and also from some other countries migrated to Arakan (now Rakhine State) and settled there. They cultivated fertile agricultural land of Arakan and earned their living and contributed to the food supply for the rest of the country. Now, Rohingyas belong to an ethnic minority group of Myanmar, who have their own culture and language. But unfortunately Myanmar authorities do not acknowledge Rohingyas as an ethnic minority group of the country. They claim that Rohingya are infiltrators who migrated from neighboring countries to Myanmar.

The trouble started in 1978 when Myanmar authorities started persecution of Rohingyas and pushed them towards Bangladesh border. Bangladesh allowed the Rohingyas to enter into the country on humanitarian ground and provided them with food and shelter. Later with the intervention of United Nations High Commissioner for Refugees (UNHCR), about 200,000 displaced Rohingyas were repatriated in 1979 to their homes in Rakhine State. However, Myanmar refused to take back 20,000 Rohingyas who are still staying at two camps in Bangladesh under the management of UNHCR. Bangladesh and UNHCR are insisting for their repatriation to Rakhine State, but there is no positive response from Myanmar authorities.

The military crackdown on Rohingyas sparked angry protests from Jakarta to Dhaka. Myanmar’s ambassador in Dhaka was summoned to Bangladesh’s Foreign Office few days ago and Bangladesh officials lodged strong protest against persecution of Rohingyas in Rakhine State and pushing them into Bangladesh territory. Meanwhile, street demonstration in Dhaka continues protesting the persecution of Rohingyas in Myanmar. Around 5,000 people demonstrated in Dhaka on Friday (25 November) with hundreds more protesting in Kuala Lumpur, Jakarta and Bangkok to accuse Myanmar of ethnic cleansing and genocide in Rakhine State.

Diplomatic observers in Dhaka believe there should be international pressure on Myanmar government to stop persecution of Rohingyas and violence in Rakhine State. At the same time Rohingya refugees in Bangladesh should be repatriated to Myanmar for the greater interest of peace in the region.