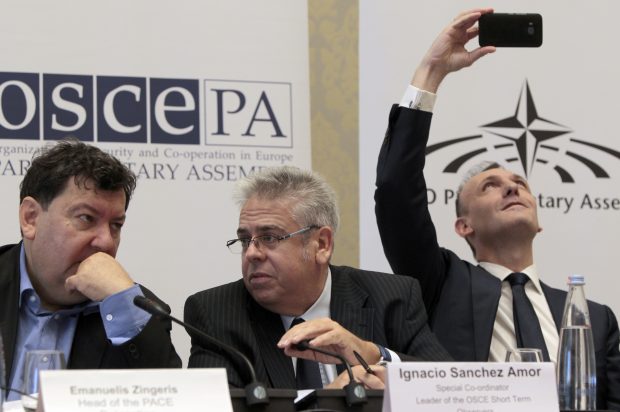 Emanuelis Zingeris, a head of the PACE Delegation, left, Ignacio Sanchez Amor, a leader of the OSCE Short Term Observers, and Guglielmo Picchi, Head of the OSCE Parliamentary Assembly Delegation, right, attend a news conference after the parliamentary election in Tbilisi, Georgia, Sunday, Oct. 9, 2016. Georgia’s governing party, which has pursued both closer ties with the West and improved relations with Russia, was strongly in the lead Sunday after votes for its parliamentary election were counted from more than 80 percent of the country’s precincts. (AP Photo/Shakh Aivazov)

According to the preliminary-results provided by the Central Election Commission (CEC) of Georgia, as an outcome of the Parliamentary Elections held on October 8, 2016, three parties would enter the legislative body of the country through the proportional list-out of 25 election subjects that have crossed 5% barrier: 1.the ruling party, pro-Western – “Georgian Dream – Democratic Georgia”(with 856406 votes – 48.68 %), 2. opposition, self-declared as also pro-Western, although accused in establishing authoritarian regime under their governance till 2012-2013- “United National Movement”(with 476948 votes – 27.11 %), and 3. ultra-nationalist, widely perceived as pro-Russian- “Davit Tarkhan-Mouravi, Irma Inashvili – Alliance of Patriots of Georgia, United Opposition”(with 88100 votes – 5.01%).More than 800 candidates ran for the 73 single-district seats.

Based on the official information, the second round of Parliamentary Elections is expected to be held in 50 majoritarian election districts out of 73 nationwide, including 18 out of 22 precincts of Tbilisi and 32 out of 51 regional precincts.After Saturday’s vote “Georgian Dream – Democratic Georgia” (GD) candidates won outright in 23 districts, while a winner was not identified in the remaining 50 districts.In the second round “Georgian Dream – Democratic Georgia” (GD) will compete mainly with the opposition party “United National Movement” (UNM), as well as with “Irakli Alasania – Free Democrats”, “Topadze – Industrials, Our Fatherland” and independent candidates in a few cases.Majoritarian candidates must gain at least 50% of all votes in their respective voting district in order to be able to enter the Georgian Parliament.

As of October 11, summary protocols of 6 election precincts were annulled bythe District Election Commissions (DECs).”In addition, certain number of complaints was upheld at this stage; Most of them referto imposing disciplinary liability measures to commission members. It should be noted, that in specific cases, by the decisions of some DECs, disciplinary liability measures were imposed to certain members of the PECs, however it were not requested” ? stated Ana Mikeladze, the CEC Spokesperson-during the News Briefing at the CEC.

Clashes During the Election Process

Among the affected polling stations was #48 polling station in Kizil-Ajlo village in Marneuli, southern Georgia where a clash inspired by opposition supporters forced the polling station to close earlier than 8pm, which meant that voters who appeared at the ballot box in the final hours of the Election Day couldn’t vote.In another case, a group of unidentified attackers threw stones and smashed windows at two polling stations in the village of Jikhashkari in western Georgia, Reuters news agency cited local observers as saying.They also damaged the ballot box and attacked international and local observers at the spot, Georgian Young Lawyers’ Association said in a statement.

Based on the evaluation provided by Tamar Zhvania, the CEC Chairperson on October 9, overall elections were conducted in a peaceful environment, despite some specific cases, although the voters exercised the right of suffrage freely during the Election Day. According to her, almost all assessments regarding the Election Administration (EA)made by international observer organizations were positive.

“Summarizing of election results conducted through proportional election systems shall be completed no later than October 27” – noted the CEC Spokesperson.According to the respective legislation, the second round of elections will be called after summarizing the election results of the first round. Consequently, the deadline for conducting the second round elections is November 2.

New Period of the “Georgian Dream”

The preliminary results of the proportional elections suggest that the “Georgian Dream – Democratic Georgia” pre-electionslogan of which was: Freedom, Fast Development, Prosperity, will get 44 MPs, the “United National Movement” that before the elections was trying to spread the message of mobilizing themselves with the new power for Georgia’s progress, will gain: – 27 seats and the “Davit Tarkhan-Mouravi, Irma Inashvili – Alliance of Patriots of Georgia, United Opposition”manipulating the public opinionwith the populist pre-election slogans, – 6 MPs in the 150-seat Parliament, where 73 MPs will be elected in 73 majoritarian, single-mandate constituencies, while the remaining 77 seats will go to MPs elected through proportional (party-based) lists.

The GD will get 23 mandates from majoritarian elections,which ended in the first round after its candidates won in 23 majoritarian districts. At present, the ruling party has 67 guaranteed seats in parliament.

It is noteworthy to mention that two exit polls in Georgia’s Parliamentary Elections on Saturday showed the ruling party in the lead, but the polls differed sizably on the margin of victory.A poll conducted for Georgia’s public broadcaster and other stations showed the ruling GD party with nearly 54% of the vote Saturday and the opposition UNM party at 19.5% support. However, an exit poll for the independent channel Rustavi-2 put the figures at 39.9% for the ruling party and 32.7% for the opposition.The discrepancy could feed tensions after a campaign that included a car bombing of one prominent opposition politician and shots fired at another candidate.

Based on the exit polls, Prime Minister Giorgi Kvirikashvili told “Georgian Dream – Democratic Georgia”party members: “I congratulate you on a big victory.””These elections are a very important step forward toward reinforcing Georgia’s image as a democratic European state,” Kvirikashvili stated after casting his ballot. On the contrary, the UNM leader David Bakradze told journalists that he believes his party will prevail once single-constituency races are tallied. “Davit Tarkhan-Mouravi, Irma Inashvili – Alliance of Patriots of Georgia, United Opposition”was likely to pass the 5% threshold it needs to be allotted seats, according to the exit polls.

The summary protocols and information from the Precinct Election Commissions(PECs) on Sakrebulo By-elections and Extraordinary Elections of Mayor and Gamgebeli provided on the CEC website suggest that the second round of Gamgebeli Elections might be conducted in several election districts and municipalities with the evident prevail of the GD candidates.

Taking into account the elections’ outcome as well, and despite certain controversy existing in the Georgian society at large concerning the foreign policy course of the country, the former Soviet nation-appears more determined to enhance its Westernization and further integration with the European Union and NATO, keeping alive currently still distant hopes of joining these entities.