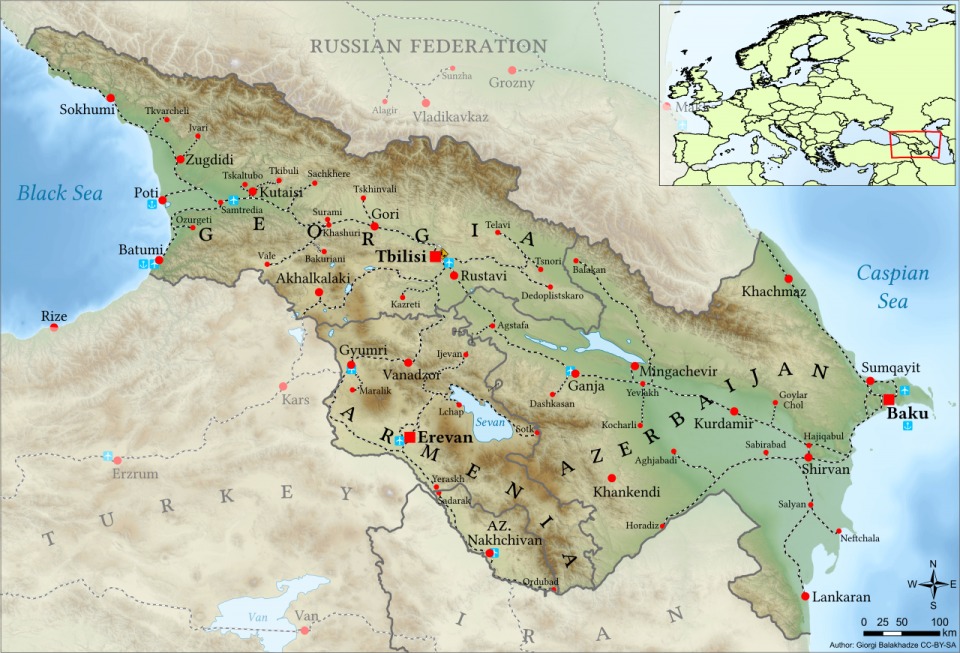 The South Caucasus: Real Needs in the Permanently Changeable Environment

Practically daily observation of the life quality precisely in Georgia, however also as well as in the other two South Caucasian countries justifies the real picture shown in the latest in numbers; according to the latest, Caucasus Barometer 2015 regional data set (Armenia and Georgia) says, the “most important issue facing the country” in Georgia is “unemployment”(55%), while the second place is gains ? “poverty”(15%).

In Armenia we have almost the same proportion of the answers to the same question; 42% of the surveyed identified “unemployment” as the number one “most important issue facing the country” and 17% – “poverty” inon the second place. According to the latest relevant data for Azerbaijan(from 2013), i.e. of the Caucasus Barometer 2013 Azerbaijan provides slightly different proportion of the answers to the question; interesting is that for the Azerbaijanian society think “unsolved territorial conflicts”(38%) stands as the most problematic issue hypothetically bothering its members, while? “unemployment” gains the following position with the 25% of the votes, and “poverty” is on the third place in this list(8%). It’s noteworthy to mention that the survey question had nine possible responses or “values”: unemployment, poverty, unsolved territorial conflicts, problematic relation tensions with Russia, unaffordablility of healthcare, low pensions, rising prices / inflation, other, and DK/RA(‘Don’t know’ and ‘Refusal’) no answers.

In the case of Georgia, specifically “unemployment” mainly leads the identical survey list from the time period since 2008 to 2015. Almost similar is the statistics of Armenian statistics show the same from 2008 to 2013, while Azerbaijanis, whose situation is different from is two neighbors due to its energy resources and comparatively thriving economy as can be assumed significantly due to its energetic resources and high salaries at least in comparison with the other two regional republics, seems majorly mostly concerned with the “unsolved territorial conflicts.” that is the stable trend during the whole six years from 2008 to 2013.

Although, since 2010 to the final so far ? 2013, “unemployment” was assessed as became the second “most important issue facing Azerbaijan”. Poverty became especially problematic for the last years continued to grow as a problem in Georgia shifting its place initially from the moving from its initial place in fourth and third to the to second one in 2015, while it kept the third stable position in the case of Armenia, and the fourth on the example of Azerbaijan since 2008 to 2013as it likewise stayed bad or got worse in the region.

Therefore, based not only on arguable from the scientific point of view sometimes statistical data, however nor ignoring them along with the outcomes of the qualitative analysis conducted by us, we are able to translate the findings of the both research methodology employed here into such top priorities revealed by the South Caucasian societies are thus largely concerned with at large as are overcoming unemployment and poverty, i.e. resolving social and economic problems first of all. Consequently, it is undoubtedly logical to assume that under the conditions when physical survival of the prevailing parts of the publics. The survival of these states is frequently under in critical danger due to the critical high levels of unemployment and poverty (the life quality in Azerbaijan as well, along with Georgia and Armenia, started to deteriorate sharply and suffer from the especially with ongoing national currency devaluations and rising inflation), and foreign relations concerns overall, and in particular, making essentially hostile radical orientation choices between the such as choosing between the West and Russia feel secondary and even luxurious. (especially in the permanently changeable environment with unstable actors and rules of game that on the other hands, can be totally explained in their own context), which at the same time has never proved to have visible encouraging consequences for the standard of living of the ordinary citizens, societies, and well-being of the states to choose at large, normally run out of the public grassroots agenda, felt as secondary and often luxurious, if not avoidable to the possible extent.

Real needs, such as increasing the GDP and economic growth and performance, as well as the fairer distribution of wealth, are more urgent. The political elites and establishments in the South Caucasus must listen to and meet their societies’ demands for social and economic stabilization, fight against unemployment and poverty by supporting local production and agriculture, intervene in the economy for the especially vulnerable, and focus on the healthcare system, education, and so on.

In order to claim public demands for solving social and economic problems and at certain degree ensuring safety for them in this regard as their foremost legitimate “real needs”, always has to be taken into account not exclusive understanding of the difference between GDP and successful economic performance/growth of a state/s, and GINI indices having no relevance in the sense of how equally or unequally the populations’ incomes are distributed.

Important is acknowledging the fact that the mainstream political elites and establishments in the South Caucasian countries keep to constantly ignore to somehow admit, prioritize and meet their societies’ demands for social and economic stabilization, fighting against unemployment and poverty through supporting by all means first of all development of the local production and agricultural activity even initially via subsidies, balanced state intervention in the economy in general, with the special consideration of the vulnerability and focus on the healthcare system, education, labor and social affairs, etc.

Furthermore, ongoing developments in Europe and the US (migration crises, rising unemployment, growing radical right-wing moods, nationalism, xenophobia, and in fact, identity crises) demonstrate that as everything is permanently dynamic and mutable changeable, and traditional societies in developing countries (such as the nations of the South Caucasus) cannot look to the West for guidance and assistance. Domestic challenges force democracies to focus on their own problems and effectively change their diplomacy tactics as well.

All in all, South Caucasian countries have been effectively abandoned by the West, and they are especially vulnerable to additional Russian intervention. Although local politicians may try use this strategic standoff to gain an upper hand, all three countries need to focus on economic and social development. Local leaders have even suggested putting in economic protectionist policies in some industries and agriculture. No matter what happens, the dynamics of the international scene are forcing South Caucasian politicians to look at real needs of the local population. including current critical society demands within even such developed Europe and the USdue to complex internal issues mentioned above, hopes for the developing countries, containing the South Caucasus as well, for extensive Western participation within the region and assistance for their further democratization or financial, economic or social aid have lesser grounds.

Challenging inner processes make the leader democratic states more focused on their own problems and thus, less active on the international arena overall, where their priorities, strategies and tactics could also alter.

Taking into consideration all the factors and arguments, South Caucasian countries can be more seen at certain point objectively abandoned especially from the Western influence to their real troubles and needs that has an already obvious potential tobe used for the extension of the Russian intervention policy in the region or Ukraine.

Distinctly in the situation more likely to be characterized with the lack of balancing opportunities, even if first of all the most pro-Western and anti-Russian Georgia attempts to use such strategy between Russia and the West, in our opinion, all the three South Caucasian countries need to focus foremost on their internal development problems. Not only the evident public demands signal pushing for prioritizing internal, i.e. social and economic development in these states through suggesting to implement for instance, even economic protection, intensive industrial or agricultural policies, etc., but also international events and as it once again can be witnessed, permanently changeable foreign environment exhibit the needs for shifting the local governments’ priorities towards actually meeting the local populations’ real needs and responding to them through appropriate initiatives and efficient policiesin a more inclusive and adequate manner.