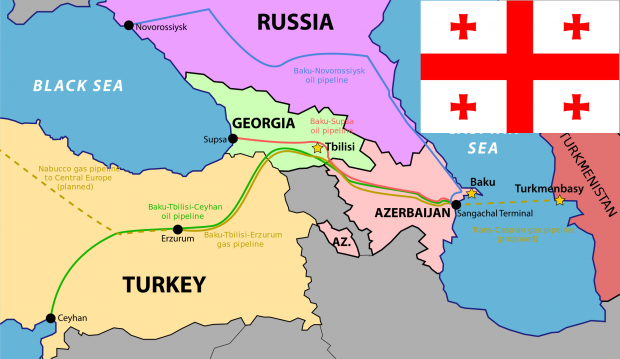 On 16 January 2017 Georgian Economy Minister Giorgi Gakharia signed a Memorandum of Understanding(MOU) on “Strengthening the New Silk Road Initiative” with Zhang Yuzhou, CEO of CEFC China Energy Company Limited. The corporation has business interest in energy and financial services and intends to purchase 75% of shares in Poti Free Industrial Zone(FIZ).

The FIZ was established in 2011 and initially wholly owned and managed by a subsidiary of the RAK Investment Authority(RAKIA) of the Emirate of Ras Al Khaimah(UAE). In 2016, however, RAKIA transferred 85% of its shares in Poti FIZ to the Georgian government.

The signing of the MoU with CECF is part of a budding strategic cooperation with China, which sees Georgia potentially as one element in its “One Belt, One Road” initiative, more clumsily known as the “Silk Road Economic Belt and 21st-century Maritime Silk Road.” This initiative covers around 60 countries primarily in Asia and Europe-but also in Oceania and East Africa-and leverages massive Chinese investment in infrastructure networks to foster connectivity and cooperation between China and the rest of Eurasia.

On its part, following the signing of a Deep and Comprehensive Free Trade Agreement(DCFTA) with the European Union in 2014, Georgia is betting on its attractiveness as a trade entry point for third countries to the European market. A bilateral free trade agreement with China is expected to be ratified by mid-2017.

The MOU signed in January states that its aim is “to encourage the realization of the potential of the New Silk Road.” Economy Minister Gakharia also expressed hope that it would help to attract further Chinese investment in Georgia. Another FIZ near the urban center of western Georgia, Kutaisi, is already operated by China’s Hualing Group, which has so far invested a massive half-billion dollar in five development projects around the country.

Given both countries’ joint interest in economic and transport cooperation, it was somewhat surprising that the tender for the Anaklia deep sea port on Georgia’s Black Sea coast-promoted by Georgia as a crucial link in the Silk Road corridor ? was not awarded to a Chinese-Georgia bid backed by state-owned PowerChina in summer 2016. The winning Anaklia Development Consortium(ADC) was formed by Georgian investment group TBC Holding in cooperation with the Conti Group, a U.S. engineering behemoth. In fact, ADC is apparently in negotiation with Seattle-based SSA Marine over the operation of the Anaklia deep sea port, as announced in a government press release on 10 January.

Nevertheless, Chinese-Georgian economic and infrastructure cooperation merits continued attention; even more so as the Georgian government is also busy fortifying transport connectivity with its regional Eurasian partners. The Baku-Tbilisi-Kars(BTK) railway, a project that is slated to complete the rail transport corridor linking Turkey via Georgia to Azerbaijan (and thus on to Central Asia and China), was one major theme of discussions between Turkish Prime Minister Binali Yildirim and Georgian Foreign Minister Mikheil Janelidze during the latter’s visit to Turkey on 9-10 January.

BTK was originally planned to be completed by 2011 but has suffered repeated delays and should eventually become operational this year. Once completed, it will help further drive down cargo transport times across Eurasia(from 15 days travel time between South Korea and Istanbul in 2015), thus making rail increasingly competitive with maritime transport. BTK’s initial annual volume is pegged at 6.5 million tons of cargo but expected to rise to a long-term target of 17 million tons. During his visit to Turkey, Foreign Minister Janelidze addressed the annual conference of Turkish diplomats, referring to the trilateral cooperation between Azerbaijan, Georgia, and Turkey as the most important pillar in the East-West transport corridor.

Similarly, an emphasis on joint transport projects was also noted in discussions between Janelidze and his Iranian counterpart Mohamad Javad Zarif in Tehran, where the Georgian foreign minister was visiting just a day after his meetings in Turkey. Iran, which is an important trade partner for Georgia, has an interest in strengthening partnerships with Tbilisi in order to diversify its cargo transit routes and develop a viable alternative to maritime cargo shipments.