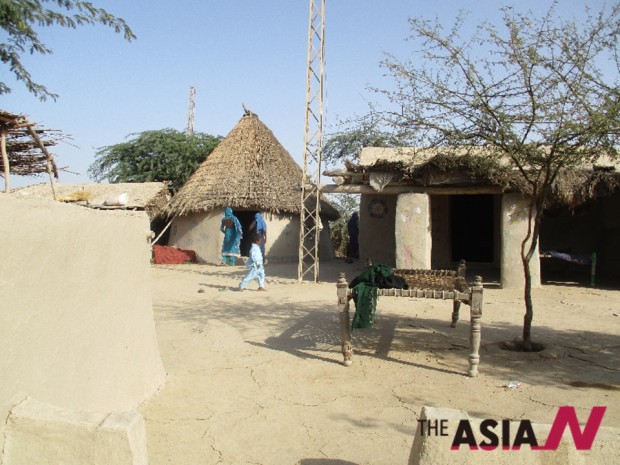 Thar Desert where Hindu and Muslims bury their loved ones in common graveyard
While travelling across Thar, world’s 7th largest desert divided between Pakistan and India, one would be amazed to know that the vast arid land faced with persisting drought and other natural calamities, is the cradle of interfaith harmony, where the Hindus and the Muslims bury their loved ones in common graveyards. The Thar Desert is also home a large number of temples and shrines of saints where the people of different faiths could be seen coming for pilgrimage.

“The Muslims and Hindus have common cemeteries in desert villages and one of them named as ‘Ranna Sar graveyard’ is located near Chelhar village,” Bharu Mal Amrani, a local journalist and rights activist, told a group of newsmen from Karachi and Hyderabad during a meeting with people of religious minorities at Chelhar village near Mithi, the district headquarter town of Tharparkar on December 13, 2015.

“First, we are human beings and then Hindu or Muslims, we all face the severities of drought and diseases alike being the common problems and never confront each other,” he said disapproving the general perception that there exists discrimination of any kind against the religious minorities in desert district. “We live and die together and are buried in same cemetery,” he said adding that Muslims, Meghwar, Bheel, Kolhi and other communities use to live in Chelhar village sharing their woes and joys.

The journalists’ team was on visit of Mirpur Khas, Umerkot and Tharparkar, three districts of southern Sindh Province of Pakistan, bordering the India, in second week of December 2015. The four-day tour was arranged by Sindh Rural Partners’ Organization (SRPO), working for rights of religious minorities and interfaith harmony. The study tour was aimed at taking stock of the situation with regard to social, political and economic rights of religious minorities and certain reported cases of abduction, forced conversion to Islam and marriages of Hindu girls besides observing the state of interfaith harmony. The three districts were chosen as majority of rural population in Mirpur Khas is composed of Bheels, Kolhis and Meghwars while they account fifty percent of the population in Umerkot and Tharparkar districts. The SRPO has formed a network of ten Local Support Organizations for effective liaison the oppressed communities.

Bharu Mal, who represented the Association of Desert Development, disparaging the government policies, said: “The desert is rich in natural resources like country’s largest coal reserves and China Clay. We have 4.5 million cattle heads here that meet the 45 percent needs of meat of big cities but even then the desert people have scanty source of livelihood only because the government has not yet formulated any desert development policy.”

As far as issues of religious minorities are concerned, both the persons however drew attention towards non-existence of Hindu Marriage Law in Pakistan. “The Hindus have no system of registration of marriages and thus Hindu couples face hardships proving their marriage while applying for the computerized National Identity Cards,” they told.

This issue was also raised by Mr. Lal Malhi, member, National Assembly of Pakistan, when the journalists’ team met him a day earlier at Umerkot. “The Federal government plans to introduce Hindu Marriage Bill in the parliament, which in fact has been copied from an Indian law with addition of certain new Articles. One of such Articles envisages that the marriage would stand dissolved if a person converts to any other religion, and we have raised objection to it,” Lal Malhi told.

The parliamentarian, who represents Hindu communities, told he intends to move two private bills ? one for establishing National Commission on Minority Rights and the other against Forced Conversion. “Conversion to any other religion and marriage is a humanitarian problem but one should not be forced for it,” he exhorted.

Hindu class difference issues
Certain cases of embracing Islam by Hindu girls of well off families and marrying to Muslims had been reported in northern parts of the province, however, in South the case was a little bit different, as majority of religious minorities belonged to lower castes living in abject poverty. “The ninety percent population of religious minorities in Sindh lives below the poverty line,” Lal Malhi confirmed.

Bharu Mal Amrani however rejected allegations of abduction, forced conversion and marriages saying young Muslim girls too often elope when they fail to get consent of their parents and same is the case with girls from religious minorities. “It’s a social issue and not the religious one,” he viewed.

In Mirpur Khas, Mr. Mangha Ram Kewlani, the Secretary of Hindu Panchayat (Association) too dispelled the impression that their girls were being abducted, converted and married to Muslims. “No such case has taken place in southern districts,” he said however opined that it might have happened in schedule caste communities.

It transpired during the discussion with official of Hindu Panchayat, representing Luhanas, the upper class caste in Hindus, that they keep Bheels, Kolhis, Meghwars and other lower caste people at distance and are indifferent to their problems. The men and women of these communities also voiced against such attitude of upper class Hindus when the journalists’ team visited some other towns. “We are victims of class difference, deep-rooted in Hindu society,” Vidya Meghwar, one of a dozen female members present at the office of Local Support Organization Development & Awareness Women Network (DAWN) told at Diplo, a historic town of Tharparkar. The organization, led by Muslim women, is striving for the rights of female population of lower castes.

Similar views were expressed by one Somji Mal Dharani, a retired government officer, in a meeting with officials of Sujag, another Local Support Organization, in same town. “The people of Meghwar community are mostly engaged in construction of temples and mosques, as they work as masons and laborers, but they are never allowed to enter when these worship places are built,” Somji, who himself a Meghwar, told.

It was gathered during the study tour that different schedule castes like Bheel, Kolhi and Meghwar, deprived of social, economic and political rights, had been encountering indifferent attitude even of their own elites and elected representatives.

The religious minorities so divided due to class system and facing severe hardships caused by natural calamities and government indifference, were however peace-loving and believed in co-existence. They use to visit the shrines of Muslim Saints and their love and respect for the Muslim Saints is reciprocated by the Muslims who often visit the temples.