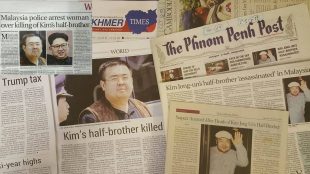 Like other foreign media outlets around the globe, the Cambodian both offline and online media run their international stories on the assassination of Kim Jong-nam, North Korean President Kim Jong-un’s haft-brother, on the Valentine’s Day of 14 February in Malaysia Airport.
Since the Kingdom has diplomatic relations with both North and South Koreas, there is no any comment from the Cambodian government officials on the killing of Kim Jong-nam, 45, who was born from Late President Kim Jong–il with Sung Hae-rim, a popular South Korean-born actress in the 1960s and died in Moscow on 18 May 2002 at aged?65.

Though the North Korean government has no much activity in Cambodia, the newly appointed Korean Ambassador, Jang Yun Gon, who met with Cambodian Minister of Foreign Affair and International Relations in mid-January this year said that although the international circumstance has changed Cambodia and North Korea have their strong bilateral relationship and remains unchanged.

However, Cambodian Foreign Minister Prak Sokhonn told Jang Yun Gon that as a member of the UN, Cambodia strongly called on the North Korean government to completely respect the UN’s decision and urged the North to comply with all concerned parties to resolve tensions through peaceful negotiation.

While Cambodian King has his private residence in Pyongyang provided by the North Korean Supreme Leader Kim Il-sung, the North Korean Embassy in Cambodia is located next to Prime Minister Hun Sen’s house and the embassy was a villa where late King Norodom Sihanouk was born on October 31, 1922.