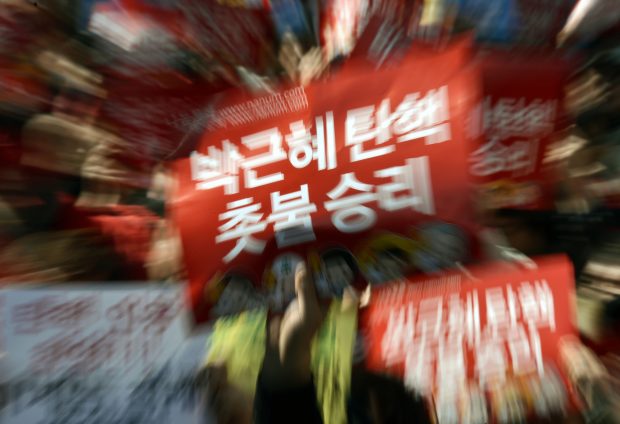 Now the back story on this scandal is that the South Korean lawmakers voted in December to remove Park from office over a corruption scandal. However, under the South Korean system the Constitutional Court must confirm the decision before it can take effect. The lawmakers have voted to impeach Park by a vote of 234 to 56, which would take away her executive powers.

The accusations surrounds Park’s friend and informal adviser, Choi Soon-sil, who prosecutors have detained on charges of abuse of power and attempted fraud following accusations she had access to secret government documents and intervened in state affairs.? Also one of the main allegation was that she colluded with Choi Soon-sil to extort South Korean conglomerates to donate $70 million to two dubious foundations in exchange for favorable treatment. There were also other charges related to Park’s allegedly negligent handing of the 2014 Sewol Ferry disaster that killed over 300 people, and to Choi purportedly using presidential connections to gain her daughter admission into a prestigious university.

Park has stated that she is not guilty and also never benefited from her office and was unaware of any illegal activities allegedly done by friends or subordinates. In conclusion if the court rules against her, she would be the first democratically elected South Korean leader to be ousted from office. That would also trigger an election for a new president within 60 days.

Since Park was?suspended from office last December by the Parliament ruling, she was stripped of her presidential powers. With the?Constitutional Court’s final verdict today, Park will have made history for the second time around: the first time was when she was elected as the first female president of South Korea and this time, as the first South Korean president to be formally impeached.