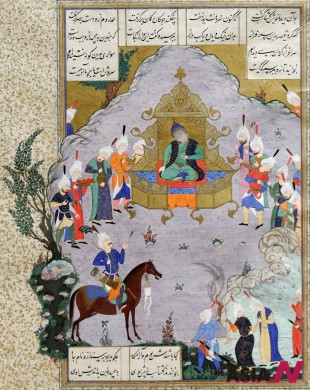 Issued by the Dar Suad Al-Sabah for Publishing and Distribution in Kuwait, is a new edition of one of the most important epics of world literature, Shahnama, the most famous work of art in Persian literature, written – basically – by Abu Qasim Firdawsi, more than 1000 years ago.

Introduced by Dr. Suad Al-Sabah, poetess and 2012 Manhae Prize winner in literature, the modern print edition (750 pages) is opening the doors to understand world cultures, languages and civilizations. The project is also devoted to revive the treasures of thought, literature and culture, whether from the Arab heritage or different global eras, both ancient and modern, to become a bridge between East and West, as well as between Arab and other nations.

When I received this special edition, I called Dr. Ali Masoudi, who supervised the new edition, which was first translated in 1932, by Prof. Azzam, and published by Dar Al-Kotob Al-Masreyyah, to narrate the full story of Persian kings (Shahnama means book of kings), by mixing legends, history and folk tales.

It was more than one thousand years ago when the Persian poet Firdawsi completed his great masterpiece of world literature: the Shahnama, or Book of Kings. Composed of some fifty thousand verses, the sweeping epic recounts the myths, legends, and “history” of Iran from the beginning of time to the Arab conquest in the seventh century.

Firdawsi’s text is centered on the reigns of fifty monarchs (including three women) and can be divided into a legendary and a quasi-historical section. It begins with the reign of the Kayumars at the dawn of time and concludes with the last Sasanian king, Yazdigird (reigned 632?651), who was defeated by the Arabs.

These fifty “chronicles” provide a framework for the dramatic deeds and heroic actions of a range of other personages who are often aided by ? or at battle with ? a host of fantastic creatures and treacherous villains. The poetry draws on a wealth of sources, including local and dynastic histories, the Avesta (the sacred text of the Zoroastrian religion of ancient Iran), and myths and legends preserved in oral tradition.

Over the centuries, foreign conquerors and local rulers alike were drawn to the Shahnama for its emphasis on justice, legitimacy, and especially the concept of divine glory. Known as khavarnah in the Avesta and as farr in modern Persian, divine glory was considered the most important attribute of kingship, for it enabled rulers to govern and command obedience. Not surprisingly, commissioning of lavishly illustrated copies of the Shahnama became almost a royal duty. By representing the kings and heroes of the epic according to the style of their own times, members of the ruling elite were able to cast themselves as the legitimate heirs of Iran’s monarchical tradition, which according to Firdawsi dates back to the beginning of time.

The many miniatures I collected of the Shahnama are giving their own beauty as they give observers the chance to relive the daily lives of kings. Artists have given much care to the minute details of palaces, gardens, types of decor, works of constructions, differences in clothes, as well as the items of music and daily life. A scene of the epic can be read as following:

“For many years had the sons of Feridoun sat upon their golden thrones in happiness and peace, but evil was hidden in the bosom of Fate.
For Feridoun had grown old, and his strength inclined to the grave.
And as his life waned, the evil passions of his sons waxed stronger.
The heart of Silim was changed, and his desires turned towards evil; his soul also was steeped in greed. And he pondered in his spirit the parting of the lands, and he revolted thereat in his thoughts, because that the youngest bore the crown of supremacy. Then he bade a messenger mount him upon a dromedary swift of foot, and bear this saying unto Tur-
“O King of Turan, thy brother greeteth thee, and may thy days be long in the land. Tell unto me, I pray thee, for thou hast might and wisdom, should we remain thus ever satisfied, for surely unto us, not unto Irij, pertaineth the throne of Iran, but now is our brother set above our heads, and should we not strive against the injustice of our father?”

Now. when Tur had listened to these words, his head was filled with wind, and he spake unto the messenger and said-
“Say unto your master, O my brother, full of courage, since our father deceived us when we were young and void of guile, with his own hands hath he planted a tree whence must issue fruit of blood and leaves that are poison. Let us therefore meet and take counsel together how we may rid us of our evil fate.”