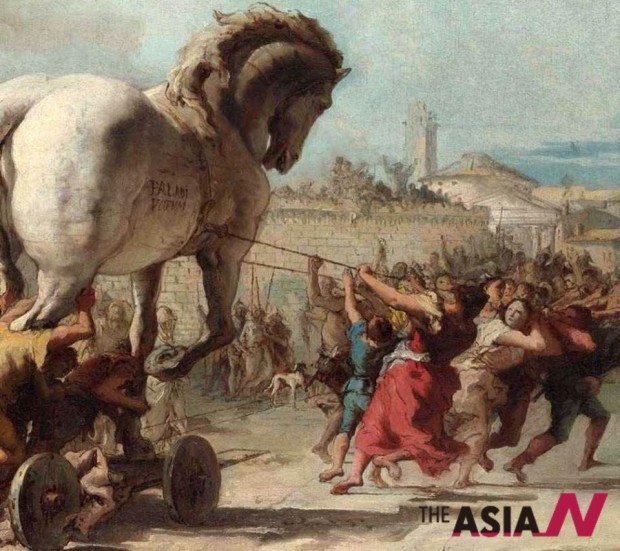 Troy: Between myth and history

During the seven-hour trip by bus from Istanbul to Troy, I looked at Turkey’s spectacular scenery: wide fields of yellow flowers followed by hills covered with shades of green and then wide spaces of rose fields until we reached the Dardanelles Strait, which we crossed on a big ferry boat to the other bank where the city of Canakkale, the nearest to the ancient area of Troy, lay.

Though we finally reached the outskirts of Troy, two things prevented us from exploring the historical city, which dates back to the age of Homer who portrayed it in his famous epic poem.

We had to wait until the following morning to see the ruins of Troy, which, but for the stratagem manifested in that big wooden horse standing at the entrance of that legendary town, nobody would have been able to approach.

At the bus door, the handsome assistant driver told us Troy was a few steps away. We got off the bus to find ourselves five kilometres away from Troy. I was astonished to discover that I had to walk that distance and I burst into hysterical laughter.

I left Istanbul seven hours earlier, passed by many cities and towns, stopped many times, travelled hundreds of kilometres by road and crossed the Adriatic Sea, but instead of reaching Troy we were on the side of the road, as seen in American films.

I stood almost hopelessly at the beginning of the road to Troy. At last, we breathed a sigh of relief when a Turkish man with rural features stopped his car and waited to see a relative of his.

He kindly agreed to give us a lift to Troy, but after travelling for not more than five kilometres, he suddenly stopped in front of a bazaar telling us that was the end of his trip. He tried in Turkish to tell us something, but as we did not understand anything, the shopkeeper explained that Troy is a national reserve that is open for only a limited number of hours. That was the second surprise.

As he pointed out that tourists stay in small motels in that village and visit Troy in the morning, we spent the night in a small rural house in the village, surrounded by thousands of birds that kept hovering over us singing.

As we approached the ancient city, the famous enormous wooden horse was in the distance.

Days went by, but Troy was still closed! Ulysses had to think of a stratagem. He suggested that the campaign leaders invite the cleverest carpenters and sculptors to make a large hollow horse where some of the bravest Hellenistic fighters would hide.

He would then deceive the fleet that he had sailed with the campaign’s soldiers. In the dead of night, the Trojans drew the horse inside their city as a reminder of that all-out, bloody war in which their best youth were killed.

In the last watch of the night, the hidden champions emerged from within the horse and the army broke into the mighty city, under whose walls people were humiliated and souls perished and were buried.

Thus wrote Homer telling the story of the Trojan Horse in his famous epic poem the Iliad. But we have to go back a little to understand the story from the start.

Legendary Troy was a big city ruled by King Priam, and according to Homer, the king’s son, Paris, was asked to judge a beauty contest among the Greek goddesses Hera, Athena and Aphrodite.

He declared the latter the winner of the contest, as she had promised to marry him to the most beautiful woman in the world. Paris later visited Menelaus, the king of Sparta, and he fell in love with his wife, Helen, who was known as the most beautiful woman in the world.
Paris either abducted Helen or she willingly went with him to Troy, which enraged Menelaus, and the Greeks (called Ilium by Homer), who vowed to take revenge on Paris and the Trojans. Accordingly, a campaign was launched led by Agamemnon, Menelaus’s brother, and included Achilles and Oysseus (Ulysseus in Latin) and others.

The Greeks laid siege to Troy for ten years, but they failed to capture the city, which was fortified with huge stonewalls, until Odysseus’ Trojan Horse stratagem.

Apart from these myths, little is known about Troy’s history. Archaeologists say Troy was founded in the early Bronze Age, which started in Asia Minor in about 300 BC. The city is located on a fertile elevated plain in northwest Turkey, and was near the southern tip of the strait known today as the Dardanelles.

Archaeologists discovered nine cities, one beneath another. The second and the sixth cities in particular achieved prosperity, as Trojans were engaged in agriculture, sheep farming and the wool trade. They did business with the Mycenaeans, who lived in Greece, and with other peoples along the coast of Asia Minor on the Aegean Sea.

Little is known about the real Trojan War either. Archaeologists found evidence that the Greeks probably sacked Troy in a campaign similar to the one described in the Iliad, but the motive for this campaign is unknown. Greek scholars believe that Troy fell in about 1184 BC, whereas many archaeologists suggest that the seventh city, which was destroyed in about 250 BC, was the city referred to in classical Greek literature.

The ruins of Troy

The German archaeologist Heinrich Schliemann was the first to carry out excavations at Troy in 1870. He found evidence of the presence of a number of cities built at that site over a long period of history. At the end of the excavation area, he discovered the ruins of an ancient walled city, imposing buildings and hidden treasures of gold and silver. He mistakenly believed that this city, which he called the second Troy, was the one
described by Homer.

In the 1890s, the German archaeologist Wilhelm Durbfeld, a former assistant to Schliemann, conducted other excavations at Troy and was the first to reveal the presence of nine cities found one beneath another at the same site.

He believed that the sixth city was the same one described in the Iliad. This city, which he called the sixth Troy, was larger than its predecessors, with high walls and large rectangular houses, which were probably built around a central palace.

In 1932, Carl Plegin, an Amer ican archaeologist from Cincinnati University in Ohio, USA, carried out new excavations at Troy, which lased for six years, following which he confirmed Durbfeld’s results, except that he believed Homeric Troy was the seventh city, saying that the sixth city represented an important stage in its development, but it was not Troy as reported in Greek mythology.

Though Plegin believed the seventh city was Homeric Troy, archeologists have not been able to prove that it was the ancient city.

The Troy site remained deserted from the twelfth to the eighth century BC, except for a small village built by some Greek settlers there, in addition to a city (the ninth) built in the fourth century BC and called Ilium by the Greeks. It existed for about seven centuries and was deserted in about AD 400. It remained hidden until it was uncovered by Schliemann.

Having reviewed the annals of history, we found it appropriate to tour the area to see for ourselves the ruins of that historic city. The first thing we saw was the large wooden horse. Tourists who climb its empty stairs and look through its side openings look very small, as if they werelooking through the windows of a high-rise tower.

I went inside the horse trying to see how it accommodated the soldiers. As I climbed the stairs hidden in the horse’s abdomen, I found myself in a huge empty space with some small wooden windows through which the soldiers had watched the Trojans.

Behind the large horse was a cobbled pathway lined with some roses and shrubs, which led to a passage shaded by high, 100-year-old oak trees. Then appeared the ruins of Troy, which the Turkish government designated as a national reserve and heritage site in 1996.

Without Homer’s Iliad, nothing would have been known about the history of that legendary city or Helen, the most beautiful of Troy’s women, the cause of that bloody war.

Helen, the fruit of glamorous love, daughter of Zeus, the womanizer, and charming Leda, whom the supreme Olympian gold turned into a white swan who walks with a swinging gait along swamps and brooks. This baby girl was the ink with which he signed the declaration of war.

Homer described how she was brought up in the home of a prince, who married her mother Leda after being forsaken by Zeus, Helen’s father, and how she led a life of luxury, not accepting a husband below the level of the king of Sparta.

This was before Paris came from Troy as the son of the king to visit King Menelaus. He fell in love with her and she decided to go with him to Troy, which triggered a t e n-ye a r drama ending in entering Troy using a stratagem.

I k e p t o n imag i n i ng the l o c a t i o n a n d surroundings of the palace where Helen and Paris lived. I looked at the ruins of the houses where the Trojans lived and the very few signs that show how they were clever at arts and some handicrafts, such as pottery, inscriptions on metal, etc. Most sites, except amphitheatres and the remnants of temples, towers and gates, were obliterated.

I was only able to imagine the full shape of Troy when I saw visualized paintings of it looking its best in the archaeological museum in Canakkale, which houses most of the objects excavated including tombs, tombstones, pottery, statuettes, handicrafts, etc.