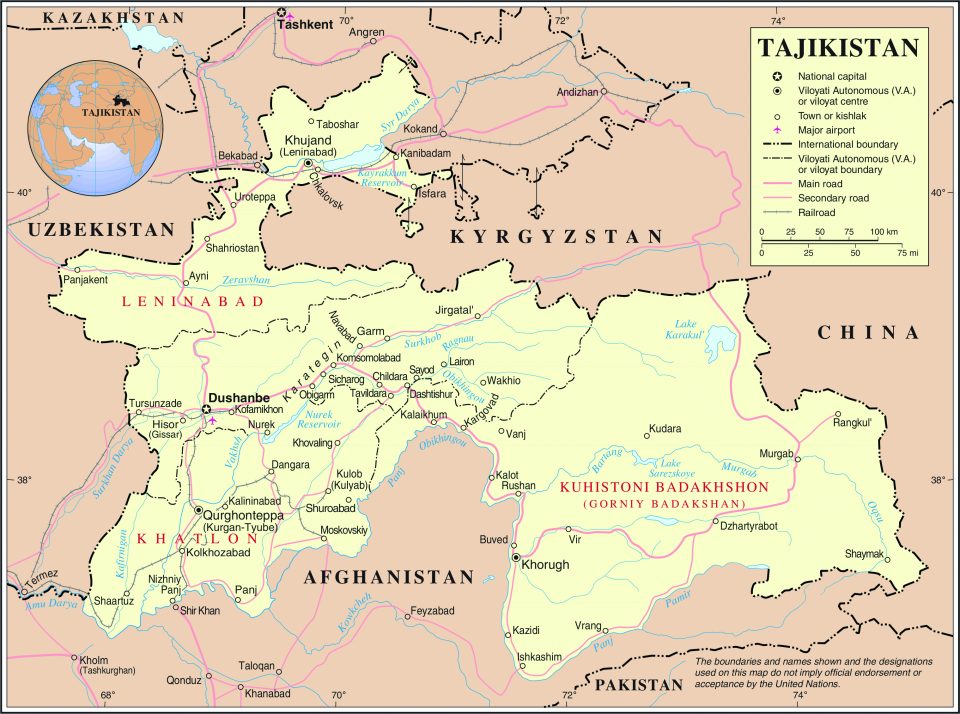 The Rogun Hydropower Plant (HPP) is being constructed on the Vakhsh River in the Pamir Mountain, Tajikistan. The dam will be the world’s tallest one and will provide the country a stable energy supply.

Emomali Rahmon, the president of Tajikistan, joined the opening ceremonies of the construction. He also watched the changing of river route and drove a bulldozer into the riverbed. Additionally, senior bureaucrats and foreign mission representatives attended this historical ceremony.

President Rahmon made the opening remarks by underlining the importance of agricultural activities in the country: “We will not leave our neighbors without water sources. We are following the valuable way of the tradition of our ancestors.” He said the dam will provide water assistance to neighbor countries.

According to the sources, the dam will have a height of 335m and will be able to generate up to 13 billion kilowatt-hours of electricity annually. Italian industrial group Salini Impregilo signed an agreement worth US$3.9 billion to build the project and the dam will double Tajikistan’s energy production, according to the group, while providing enough water for the agricultural activity.

Previously the Tajik officials announced that the dam will use its own quota and the countries of Aral Lake basin are agreed with this. So the neighboring countries wouldn’t be affected by this process according to the announcement. This situation is accepted very serious by Tajikistan who faces power cut frequently during the autumn and winter seasons.

During the Soviet Union period, the construction of this dam was firstly proposed in 1959 and a technical scheme was developed by 1965. Construction began in 1976, but the project was frozen after the collapse of the Soviet Union. A new agreement was signed to finish the project between Tajikistan and Russia in 1994. Russian company Rusal agreed to complete the project in 2004 but three years later the agreement was refused by Russian side due to some disagreements. Therefore the government of Tajikistan looked for financial assistance to complete this project. The World Bank accepted to assist after getting a report that the project is totally safe for the region. But the World Bank suspended the assistance after several discussions on river basin.

Uzbekistan, the neighbor country, has opposed this project by sharing concerns that Tajikistan will reduce the water flows to its cotton fields, will cause water problem and will damage the ecosystem of the region. It became a major dispute between two countries. Because the economy of Uzbekistan bases on mostly agriculture and the country needs a proper water source.

The website of Silk Road Reporters gives information of Uzbek initiative to share the danger of this HPP in the article of John C. K. Daly in August 2015:

“In a detailed 2012 study Murad Askarov, Uzbekistan’s ambassador to the United Nations, made his nation’s case against the Rogun HPP, writing, “In order to impound a water reservoir with a volume of 14 cubic kilometers, the significant part of the flows of the Vakhsh River will have to be blocked for at least 8-10 years. Cutting off its flow will completely disrupt the long-term regulation of water flows in the region and will raise the already increasing water scarcity to a disastrous level…”

Uzbekistan claims that the agricultural areas of Xorazm region would be scaled down around 17.7%, of Karakalpakstan region around 14.6%. The cotton production in the same region may decrease around 18%. The situation can be changed in the other agricultural areas as well. For instance, the water problem can cause 12 million$ loss in the Surxondaryo Region where produces 8% of Uzbekistan’s agricultural output.

Other neighbor Kyrgyzstan received the similar reaction from Uzbekistan about the construction of the Kambar-Ata Dam which is a proposed dam on the Naryn River in central Kyrgyzstan. The agreement for was signed during Russian President Vladimir Putin’s visit to Kyrgyzstan in 2012.

Uzbekistan opposed the project that it would reduce the flow available water in the Syr-Darya for irrigation. Still, Uzbek officials announce the water issue during the United Nations meetings, especially for the last three years. For instance, Foreign Ministry of Uzbekistan declared in another summit that HPP construction in Kyrgyzstan will cause a socio-economic crisis as an ecologic threat in the region.

In 2015, Abdulaziz Kamilov, the Minister of Foreign Affairs of Uzbekistan spoke at the United Nations Sustainable Development Summit and said: “There is a 5.5-million-hectares salt desert at the bottom of Aral Lake.” He accused the constructions of hydroelectric power plants in Kyrgyzstan and Tajikistan.

Kyrgyz Minister of Foreign Affairs Eran Abdyldaev, “Melting of glaciers till 2025 will cause 40% reduction in general volume according to scholars. Therefore the region needs a proper water reservoir.”

After those discussions, several experts agreed to make a compromise because giving a speech at the United Nations sessions is not a solution. Some analysts argued that Uzbekistan opposes the constructions of hydroelectric power plants with wrong information. Because during the Soviet time it was proved that the construction is not a danger to the environment.

The Kambar-Ata-1 Dam project was canceled by Russia recently due to the negative situation of the Russian economy. It was said that Russian companies are unable to complete the project. The project was regulated in 2008 and Russia was making 2 billion$worth investment. Now Kyrgyzstan is looking for new investors and it remains a hot topic in the region. Oleg Pankratov the deputy Prime Minister said: “There are a lot of companies interested in the project but it is hard to regulate the process for the river basin.”

The Rogun Hydropower Plant is planned to start generating power by late 2018. It is important that Shavkat Mirziyoyev, the interim President of Uzbekistan didn’t react negatively about the project. The new leadership of Uzbekistan improves the relations with Tajikistan and Kyrgyzstan.