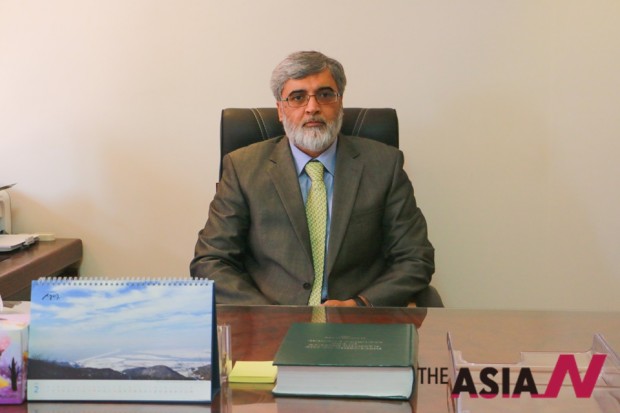 Please introduce yourself to the Magazine N readers.
“I joined the foreign service in 1989 and since then, I have served in many countries. This is my first ambassadorial assignment which I assumed in December 2013.”

What has been your activities in the last two years?
“We have had diplomatic relations between Korea and Pakistan since 1983. After my arrival here, I found out that it was important to focus on economic relations with Korea, because of the very fact that the two countries belong to regions, and they have their own political and security regime. The foreign policies of both countries focus more on their regional security regimes. But what could be binding between the two countries is to develop their economic relations. When we talk about economic relations, we talk about foreign direct investment, bilateral trade, partnership in sharing of knowledge, capacity building, technical courses and economic system. First of all, with regard to FDI, we try to encourage Korean investors to invest in Pakistan, especially in the energy sector. Some Korean companies are happy to invest there in hydro-power plants.

It is also important to compete with other exporters to Korea, in textile and leather products. We continue to work on signing a free trade agreement as Pakistan and Korea are in the process of completing a pre-feasibility study, which we hope to complete by June 2016. We then look forward to the first round of bilateral trade negotiations, which will kick start the process of FTA.

The third component, which is very important, is that the Korea Exim-bank is extending the Economic Development Cooperation fund. When I joined in Korea, it was $180 million and last September, we signed an agreement to boost it to $500 million.

We plan to work on projects which Pakistan government is currently not working on. Obviously, Korea has an edge in technological expertise. We are planning to build an IT park in Islamabad with the help of Korea Exim-bank and Korean government. It will be over an area of 2 acres, with a budget of about $100 million.
We are also trying to establish some vocational universities, because Korea is very advanced in that field and we have many upcoming industries, like automobile industry and other sectors, where people need such labor force.

Pakistan China Economic Corridor is an on-going huge investment of $46 million, which will see a lot of economic activities in Pakistan. That implies that Pakistan will need a very highly qualified labor force. This is why I am focusing on vocational training and this is where Korea’s role is important.”

How do you think this compares to India’s efforts to attract investment in the country?
“India has a distinct advantage in that sector. They have a huge class of people which is very well-educated. They have a great resource pool over there. We also have a good education system but our education system doesn’t turn out such type of graduates which are useful for the manufacturing and service industry. We are not industry-focused. I believe vocational training is the backbone of any country. Therefore, we want to set-up state-of-the-art vocational schools and other schools would spring up from there.”

Have there been or are there any plans to make efforts in art-related sectors, such as creating more opportunities for collaboration between media industry and artists in Korea and Pakistan?
“We are in the process of making such efforts but they are on a very limited scale. There are certain cultural organizations which promote artists and bring them here from Pakistan. There is Korean Culture Foundation, who organized a Hanbok fashion show in Islamabad (in October 2015). The Korean ambassador in Islamabad is very active and he is looking to establish a Korean restaurant in the city. Unfortunately, we don’t have a direct flight between the two countries and that, I think, is a major impediment, especially, in promoting our cultures. There are cultural exchanges but they are limited.

Korea has a Buddhist background so we are going to have a major exhibition of Gandhara civilization (an ancient civilization in Pakistan which lasted from 1500-500 B.C., and served as a center of Greco-Buddhism) this year. Our Korean friends, especially Korea Culture Foundation are working hard to organize and bring the artifacts from Pakistan.

What is important is the frequency of interaction, which remains limited due to expensive flights between Korea and Pakistan. Even then, I would say, relatively speaking, cultural interaction has increased than it was in the past.”

How do you plan to change the image of Pakistan in Korea? People here seem to be surprised if they know you’re from Pakistan. Similarly, Pakistanis are totally unaware about Korea.
“It depends on who you talk to. You see, before 1979, there was no terrorism, militancy or religious extremism in Pakistan. But then we suffered through it. So now, we have to face that. There are people in Pakistan who have not traveled to Korea and there are Koreans who haven’t been to Pakistan. If you talk to the well-educated class, they will thank you, because they are aware how South Korea borrowed Pakistan’s ‘Five-year Plan’ (Pakistan’s average economic growth rate was higher than the average world economy in 1960s, resulting in many countries, including South Korea, emulating Pakistan’s economic strategy). In fact, you will be surprised that about 130 students regularly go to Pakistan, and they return having a fantastic experience. They also speak Urdu. So it depends who you talk to. The business and diplomat community knows about Pakistan quite well.

Pakistan played a very pivotal role, which most Koreans don’t know. When South Korea applied in the UN to be recognized as a separate country (from North Korea), Pakistan played an important role in supporting that. ”

There is a small community of 11,000 Pakistanis in Korea. What can you tell us about the Korean community in Pakistan?
“Koreans who live in Pakistan mostly work at power companies. And there are a lot of Koreans who go there for trekking. In fact, you will be surprised to know there is a Korean who is settled in Gilgit (the capital city of Gilgit-Baltistan, an administrative territory of Pakistan). So there are many Koreans who stay there for different reasons. There are many Koreans who are permanently settled in Lahore and Karachi.”