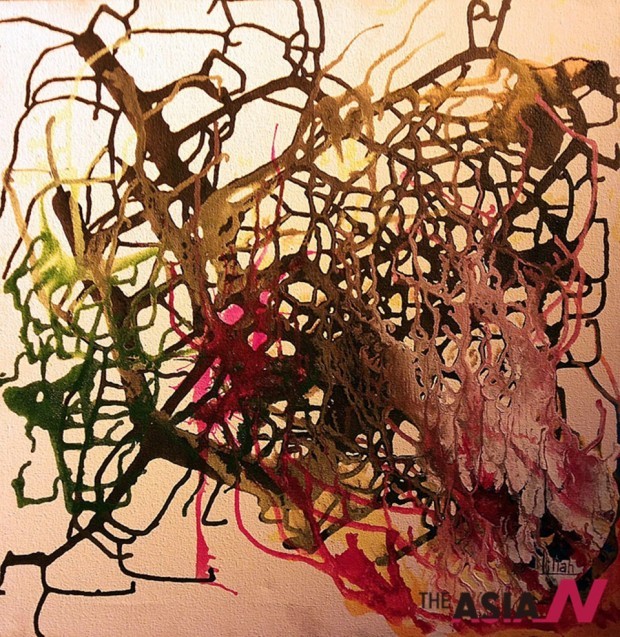 Lila Raj Khatiwada, graduated in mass communication and worked as a reporter in Kathmandu for almost a decade experienced Paranoid Schizophrenia for more than a decade. He encountered the first psychological attack during a film shoot in 1999. Two years earlier, he had begun Vipassana Meditation as taught by SN Goenka in the tradition of Sayagi U Ba Khin, the veteran Vipassana Teacher from Myanmar.

It seems that Khatiwada was shaken high by the mysterious mental illness, but he avers, “I did not suffer; rather I experienced an anomalous manifestation of mental phenomena and I could be a witness of it. He painted to demonstrate the mental condition of an affected one and the process of healing through transcendental meditation.

The doctor declared him as mentally ill several times but he didn’t agree. Diagnosed as Paranoid Schizophrenia in 2001, he visited to various places in Nepal and India for 13 years of his life. Within this period of time, he has alternated between coming out in public and retreating somewhere private. Lila Raj Khatiwada is now amongst his friends again.

Lila, who always appeared with questions, now has an answer. His hands are not empty; he has around two dozen colorful paintings that he painted. On 23 September, art lovers and journalists gathered to see his paintings at Mandala Theater in Anamnagar, Kathmandu.

“He always oozed energy and enthusiasm as a journalist working for a newspaper, but when I met him 10 years ago, he was a sad person, “Senior journalist Kishore Nepal said, “Now he has returned to social life and I’m very happy. A talented young person is amongst us.”

The artist’s plan is to exhibit his paintings in a gallery in December. Five years ago, his monochrome paintings were exhibited at NAFA Art Gallery in Naxal, Kathmandu. He relates that it was Nepal’s Senior artist Kiran Manandhar who helped him discover the world of painting and art in mass. Otherwise, he was doing it in private.

“It was Kiran sir who organized my exhibition five years ago. The day after the exhibition was over, he also gave me a bag of colors. It really encouraged me, and my colorful paintings are results of the same encouragement,” Khatiwada said.

“During the severe psychological attacks I drew sketches. Most of the times, themes were jotted in the psychiatric wards or during midnights at home and on streets alike,” says Khatiwada, ” The anomalous experiences were full of thrill and adventure but the stigma towards mental illness was too painful. Ultimately, fighting with so called psychosis was not easy enough but enormous creativity especially meditation and artworks enhanced my psychological immunity to resist and channelize the mental manifestations.”

Professor Sanjeev Upreti linked the artist metaphorically to the main character of his recently published novel ‘Ghanchakkar’. “My character suffers from schizophrenia and paranoia. Lila also suffered from the same. My character is well in the end and Lila is now back on his feet, too,” he said.

Furthermore, he said, “His old paintings had sad colors but now his paintings are bright and full of life. The paintings reflect his inner journey.” He claimed that every person has a bit of madness in him and that there’s creativity in that madness.

After seeing Khatiwada’s paintings in black and white, these new ones in vibrant colors seem obvious to artist Kiran Manandhar. He said, “If he’s regular in his craft, there’s a lot of potential in him. People have to continue learning. I’m still in the process of learning myself.”

Khatiwada came to Kathmandu 25 years ago with the intention of learning art. But once here, he was involved in journalism and worked for Naya Sadak and Space Times. His friend Bhakti Bhattarai is also happy that a person lost for 18 years has finally returned. It’s due to his support that Khatiwada started painting for the second time.

Khatiwada, currently is planning a solo exhibition. “But it is quite difficult to bare the expenditure to purchase the art material, so I am finding a sponsor; I am yet to craft some more good paintings, says the artist, “Nepal is not that much ready for professional art trade but the scenario is gradually being improved.”