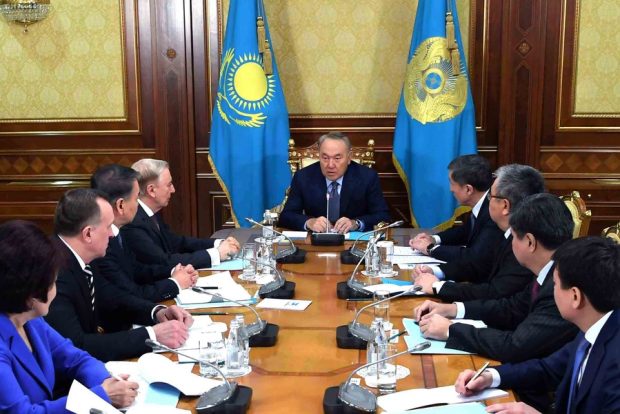 Kazakhstan pushes forward as long-awaited political changes finally happen, which is something new for the region. The change in power in neighboring Uzbekistan in 2016 accelerated politization process in Kazakhstan. Thus, discussions on the amendments to constitution and re-distribution of power emerged on the agenda. These processes can be considered as a beginning of important political developments in Central Asian region.

On December 15, 2016 President of Kazakhstan Nursultan Nazarbayev proposed to reduce presidential powers in order to empower Parliament and Government. This changes were expected to increase efficiency of government system.

On January 11, 2017, special working group was established on constitutional amendments and distribution of powers. During his public address speech on January 25, 2017, President N.Nazarbayev presented the amendments to be made to constitution. The proposed amendments were evaluated by working group and politically active part of people between 26 January and 26 February.

The political reforms expected to be made in Kazakhstan are aimed at reducing authority of the President and facilitating political transition process in the country. Reforms could ensure democratization and socio-economic development of Kazakhstan. Recently, the proposed amendments were discussed and endorsed by the Parliament of the country and on March 9, President of Kazakhstan signed the law on the Amendments to Constitution.

In general, 26 amendments were made to 19 articles of the Constitution along with 35 amendments to other laws. Nearly 35 authorities of President were given to Parliament and Government. According to the amendments, President of the State will deliver 23 authorities to Parliament in the fields of finance, economy, state ownership and administration.

According to Constitution the state government system will be preserved and responsibilities of other branches of power will be increased. All the legislative powers of President will be given to Parliament. From now on, state programs will be approved not by President, but by the Government (Article 44). This will increase the Government’s responsibility before people and Parliament.

The President shall no longer be entitled to stop the decisions of Government and Prime Minister. In addition, President will cease to have the power to issue decrees equal to laws. However, the status of the First President of the Republic of Kazakhstan is stated in the Constitution (Article 91). According to the same article, it is emphasized that Kazakhstan’s independence as a principle cannot be changed in any case along with its unitary structure and territorial integrity.

According to new amendments, President of the State appoints only Ministers of Internal Affairs, Foreign Affairs and Defense. In other words, President will be responsible for controlling defense and security, foreign and domestic politics. Future Presidential candidates have to be highly educated. Government members who do not comply with the law, may be removed from office by the President (Article 57). President preserves the right to evaluate activity reports of Government members.

President will nominate mayor of the capital, governors of “oblasts” (provinces) and major cities. The right to appoint other governors will be given to Parliament. At the same time, President may remove governors from office.

Parliament is a supreme state body and legislative power that fulfills legislative functions (Article 49). After term of office is expired, Government shall resign before Parliament, not the President (Article 70). Parliament will be empowered with additional powers to control Government’s activities. The Government will inform about its all decisions and activities by submitting reports to Parliament. Parliament will play an essential role in shaping of the cabinet. Government’s responsibilities and authorities in economy management will increase and cabinet of ministers will be more active and mobile.

In addition, role of Supreme Court will be strengthened. According to proposal by the People’s Assembly of Kazakhstan, “interfaith harmony” will be protected at Constitutional level as unchangeable principle (Article 39). “Astana International Finance Center” will have status with special legal protection, though this article has been criticized by some lawyers for giving of extraordinary rights to the center. The only article that caused severe debates in society was Article 26, which meant to bring amendments to property rights. Although, the article has been postponed for an indefinite period, however, this would trigger some challenges or unexpected reaction from part of the people in the future.

Those who commit terrorist crimes will be deprived of citizenship by the court decision. Operating procedures of international agreements in the country will be stipulated in national legislation.

However, some of local analysts argue that political imbalance in the country will last as the reforms have not been completed. According to them, the backbone of amendments is that “the basic essentials of state power system will not change”.

Although constitutional reforms were made in a very short time compared to other countries, however, it is important and symbolic historical change in Kazakhstan’s political development. For the first time the country witnessed re-distribution of powers of the regime. The process is essential for the democratic and political development of the region as well as for domestic situation in Kazakhstan. The reforms would stabilize social tensions, caused by systematic problems in the country.

It is expected that the reforms will positively affect the economic development of Kazakhstan as a result of establishing more efficient administrative system and coordinated works of power branches and state institutions.

These reforms will be also beneficial for further development of relations with the Western democratic countries in terms of attracting foreign investments. It is also a necessary step for resolving of pressing internal challenges, influenced by socio-economic effects of price decline in world energy markets. Thus, formal and legal basis for social and political changes were laid down in the country. One should state that Kazakhstan is on the verge of a new political and historical turning point. Actually, Kazakhstan needs and deserves a start of new and different period of active development.