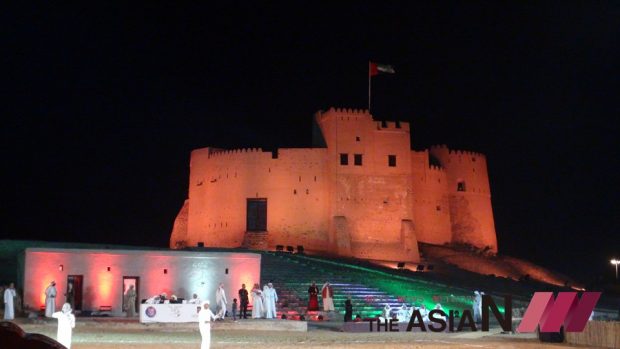 Fujairah: The Ports of Hope Part 1

On the road from Dubai to Fujairah I prepared to meet the revealing phrases which I had written down, some of which tell the history of the place, others are related to time, but the most important thing which I wrote and quoted and had in common was nothing but, man. This rough geography had only been smoothed out by youthful hands, and this awful weather had only been tamed by green ideas. In addition, these hearts, lovers of culture, art and literature, have only been harmonized by this living creature that pumped pulse through their monuments which have either disappeared or existed eternally.

The first signs of human presence on Fujairah’s land may be traced back to the Stone Age, as revealed by archaeological excavations over 30 years ago in a number of the emirate’s areas, mainly Merashid, Qidfa, Albathna and Daba. The antiquities and forums have shown the lifestyle of those who lived in this land, including the search for food and self-defence against beasts of prey, and most of the flinty implements at coastal sites were stone arrow heads dating back to the fourth and fifth millennia BC.

Moreover, there were big heaps of seashells which Fujairah’s inhabitants left and were found in periods between 5000 and 2000 BC, as documented in the analysis of the shells by carbon 14. It is not strange that no traces of human settlements were found for those people, but graves have survived, revealing the high level of civilization of that community which lived in ancient history, in addition to its communication with other civilized communities by land and sea.

The hundreds of heaps of stone which looked like domes were graves discovered in Jebel Hafeet area in Al-Ayn. Their style spread to Fujairah’s archaeological villages near Daba. The Hafeet civilization was succeeded by Umm Alnar era, called after an eponymous island in the emirate of Abu Dhabi dating back to the period between 2700 and 2000 BC.

As Hafeet graves were similar to Fujairah’s, the same is true of the circular cemeteries built during the Umm Alnar era and found in Fujairah, including those at Albadia archaeological site, which is a building surrounded by two stone walls, the internal one being about 26 meters in circumference, and consists of a number of rooms.

On the horsebacks of history we will proceed to Fujairah in the early days of Islam when the Prophet (pbuh) sent his messenger Amr ibn Al-As accompanied by Abou Zaid bin al-Sakan Al-Ansari to Jeefar and Abd, the sons of Al-Julanda bin Al-Mustakber Al-Azadi, who ruled the area then, calling them to Islam:

“In the Name of God, the Most Gracious, the Most Merficful. From Muhammad, the Messenger of God, to Jeefar and Abd, Al-Julanda’s sons. Peace be upon the one who follows the right path. Now then, I call you to Islam. Accept my call, and you shall be unharmed. I am the Messenger of God to mankind to warn anyone who is truly alive, so that God’s verdict (Word) may be passed against the disbelievers. If, therefore, you recognize Islam I shall bestow power upon you. But if you refuse to accept Islam, your power shall vanish, my horses shall camp on the expanse of your territory and my prophecy shall prevail in your kingdom.”

This account of the message of the Prophet (pbuh) is included in Dr Ahmad Khalifa Al-Shamsi’s valuable book (in Arabic) “History of Fujairah: Archaeological Discoveries,” based on Muhammad Hamidullah’s collection of political documents about the Prophetic age and that of the Rightly Guided Caliphs, as well as Sheikh Muhammad Abu Zahra’s book (in Arabic) “The Seal of the Prophets.” The quiet dialogue with which the message was associated enlightened Al-Julanda’s sons about the new religion they heard about, drew their favourable response and made them embrace Islam willingly. They let the messengers of the Prophet (pbuh) teach Islam to people, collect and distribute Zakat and alms to the poor. Moreover, Al-Julanda’s sons spread the call to Islam across South-East Arabia.

Albadia Mosque:
I’ll stop here at the oldest Islamic monument in Fujairah: Albadia Mosque. We left the city of Fujairah heading for Daba. Having covered a distance of 35 km north near the coastal road, the car stopped, and with my guide Rasul we crossed the asphalt road, which looks like a black silk carpet, to the other side, where the small mosque stood with its rare style of architecture at the foot of the mountain and guarded by Albadia Castle watchtowers.

The mosque is just 6m2 in area, 80cm long and 6.5m wide. What makes its exterior design unique is the presence of four domes each of which looks like a three-mastaba step pyramid, with a head cover at the end which looks like the one worn by Mawlawya dervishes in their whirling movement. The mihrab and walls are decorated with geometric patterns, and its small minbar has stone steps. There are shelves for the copies of the Holy Quran and skylights for ventilation. Its unique roof is not made of beams, but rather of arches, as in Gothic architecture.

With the dates which the tourist guide offered her guests she told us that this unique religious monument is considered the oldest mosque in the UAE. Prayers are still performed in it, and a courtyard has been added to it from the outside to accommodate more prayers. According to the Australian archaeological excavations, the mosque dates from AD 1446, and local building materials were used, with baked clay to join its rocks. It has been restored and rehabilitated by the Department of Heritage and Antiquities as a tourist attraction in addition to its religious function, and was opened by HH Sheikh Hamad bin Muhammad Al-Sharqi, Supreme Council Member / Ruler of Fujairah, on 13 March 2003.

From the mosque’s small court the nearby watchtowers are clearly seen. Watchtowers appear as we approach the historical castle. There are many castles in Fujairah, one of the most important of which we will visit: Fujairah Castle, which lies on the top of a 20m-high rocky hill to the north?west of the old village of Fujairah, which we visited twice, day and night. At night it looked like the location of a legendary film in its roads the spirits of the heroes of history move.

Like most monuments in the area, the castle is built from local materials, and analysis by carbon 14 shows that its building dates back to AD 1500-1550, and it was rebuilt a century or a century and a half later. We climbed the broad staircase and then a smaller internal one to stop in its interior court, and identify its main function: defence, and the subsidiary one: turning some of its rooms into jails. The castle also included the medabissa room (reference to dibs: date molasses) for collecting dates. The room window was closed to keep the room humid and for producing the date juice, which flowed from nine outlets through pointed ducts laid under the heaps of dates prepared for producing the molasses. Sun-dried bricks, mountain rocks and straw were used in building this castle at its unique location.

Sword dance championship:
In the evening we reached the castle’s court which was illuminated with renewed colours representing the UAE’s flag which was held by a mast on the top of the main tower. On the ground court a theatre with four sides was built, three for the public, VIPs and car parks and one for the panel of judges of the championship in its third session, launching the Fujairah International Arts Festival in its first session.

Asserting the UAE identity and promoting the nationalist spirit and pride in traditional popular arts were the objectives of recreating this championship, with its first round which was attended by a large crowd on top of whom were Eng. Muhammad Saif Alafkham, Director-General of Fujairah Culture and Media Authority / the Festival’s Director, Writer Grace Samawi, former Jordanian Minister of Culture / member of and advisor to the Festival’s Higher Organizing Committee, Abdullah Aldhanhani, member of the Festival’s Organizing Committee and Ali Mahdi, advisor to Fujairah Culture and Media Authority / International Theater Organization Secretary ? General.

Competition heats up in the championship and the competitors are keen to show off their skills and control of the sword, in addition to entering the ring in twos, throwing the sword above and then picking it up. The championship includes the Mazafen, sword dance sport, a heritage art which reflects the community’s social, moral, aesthetic and artistic values in a distinctive form which depends on movement, rhythm, signs, significant symbols and common meanings among the community. Surprisingly, the sword dance sport combines some arts, such as song, music and poetry.
Sheikh Dr Rashid bin Hamad Al Sharqi, Fujairah Culture and Media Chairman / Fujairah International Arts Festival President generously doubled the values of the prizes for the first three positions in the third session of the championship, awarding the winner of the first position a four?wheel drive car, the second AED 150,000, the third AED75,000.

As we are talking about sport and competition and refer to popular traditions, we will cross the corniche to the bullfighting arena.

This sport is alive in Fujairah alone in Arabia. It is played weekly, starting at 4.00 pm every Friday. We will be a little late there to perform the Asr (afternoon) prayer first.
Bulls are tethered near the fenced arena. People come to watch the bullfight; some sit on their shoes on the ground; others bring their wooden, metal or canvas chairs or those whose hand rests are made of palm fronds. Various generations and different nationalities gather, some of whom putting their cameras on cars, and little girls standing on cars, watching the scene. The place is full of sellers of juices and fresh fruit cut into slices and put in plastic cups.

Upon calling out the names of the competitors two bulls are involved in the fight, each led into the arena by two persons. As butting starts and the fight heats up, one of the bulls may run away and the announcer declares the other bulls the winner, in a centuries ? old bett the longest of which lasted not more than three minutes, with some continuing for just 20 seconds. 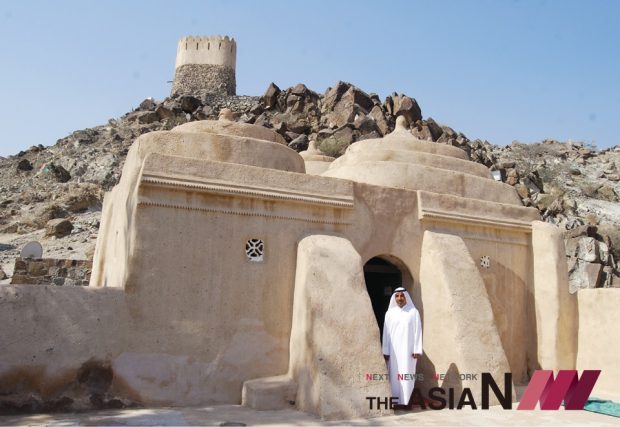