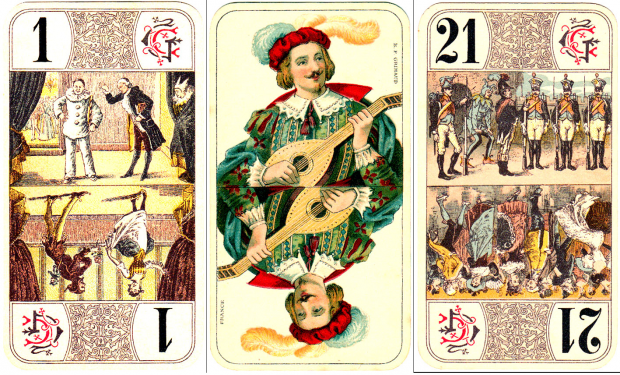 Tarot Cards: Between the Game and the Fortune-telling

The history of tarot cards is surrounded by mystery. They possess unique symbolism, which cannot be traced to one specific culture. They are rumored to contain Egyptian wisdom, Mithras religion, medieval heretics or Pagan Celtic beliefs. Different packs were designed to teach different things, such as logic, Greek mythology, religion, geography and even the art of carving meat and fish.

My first encounter with tarot cards was through the 1973 James Bond movie Live and Let die, where Bond (played by Roger Moore) investigates a murder and finds himself face to face with Solitaire, a charming tarot-card reader. The way Solitaire used these ‘special cards’ to predict the future was certainly magnificent. Ever since then, I realized that tarot cards were part of everything I came across, whether in anime such as Cardcaptor Sakura and Yugioh, two of Japan’s most famous animations, using decks based on tarot cards, or in more modern films, which feature a lot of tarot symbolism such as Star Wars and Now You See Me. That same symbolism doesn’t escape literature, from Harry Potter and Discworld, to Stephen King’s Gunslinger.

Almost all sorts of entertainment have included a depiction of tarot cards, from The Simpsons to Led Zeppelin’s songs; the world seems fascinated by the idea of fortune-telling and a deck of cards. There must be a reason why mothers and businessmen, celebrities and athletes, all seem eager to know what the future holds for them through tarot readings. The people ask their tarot mentor on advice regarding anything from work-related problems to relationship issues and their investments.

Some tarot masters claim that they merely guide them, shedding light on untrustworthy people or tempting, useless projects, relating all of their decisions to the ‘right side of the brain’, the ‘creative’ side. I wanted to test this theory for myself, after meeting with a tarot-card reader and dealing 12 cards from the deck, asking him about my work ventures. It seems that he managed to get the predictions the same way I wanted them to turn out.

The Tarot origins
The name ‘Tarot’ itself has been described as Egyptian, Hebrew, Latin, and Italian. It is most likely that the word has Italian origins. The Italian word for cards is ‘Tarocchi’, which comes from the Valley of Taro River, north of Italy. This is where some believe the cards originated in the 15th century. The modern tarot pack is said to descend from the French Tarot of Marseilles that contains 78 cards with 22 trumps.

History knows Charles the VI of France, who is also known as Charles the Mad, but what’s not widely known about him is his secret fascination with tarot cards, which is said to go back all the way to 1392. During his confinement, his mistress gifted him a deck of 56 paper board playing cards. The cards lacked the Major Arcana instead, similar to the Mamluk deck containing cups, coins, swords and staves or staffs.

Europeans interpreted the polo sticks on the Mamluk cards in this way as they were not familiar with the game at the time. The king hired historically obscure painter Jacquemin Gringonneur to beautify the cards, ordering three new decks.

According to many historians, the cards first entered Europe in the late 14th century, probably from Egypt’s mamluks, with suits of polo sticks (known as wands by those practicing occult or divinatory tarot), swords, cups, and coins (commonly known as disks, or pentacles by practitioners of the occult or divinatory tarot). These suits were very similar to modern tarot divination decks and are still used in traditional Italian, Spanish and Portuguese playing card decks.

The first known documented tarot cards were created between 1430 and 1450 in Milan, Ferrara and Bologna in northern Italy while additional trump cards with allegorical illustrations were added to the common four-suit pack. These new decks were originally called ‘carte da trionfi’ or triumph cards. The first literary evidence of the existence of carte da trionfi is a written statement in the court records in Florence in 1440. The oldest surviving tarot cards are from fifteen fragmented decks painted in the mid-15th century for the Visconti-Sforza family, the rulers of Milan.

But these cards were used to play a group of card games such as Italian tarocchini and French tarot, but from the late 18th century until the present time, the tarot has also found use by mystics and occultists for divination and fortune-telling.

The divination use of the cards is traced by some occult writers to ancient Egypt but there is no documented evidence of such origins or of the usage of tarot for divination before the 18th century.

According to a simpler timeline done by researchers who like to differentiate the original tarot cards used for games and the ones used for divination, before King Charles’ documentation of tarot cards, China had their own set of playing cards. But during the 14th century, the cards appeared more widely on the European scene, and after controversy and regulations, they were considered a work of Satan and denounced in 1432.

The Tarot motifs
“Here is Belladonna, The Lady of the Rocks, The lady of situations.
Here is the man with three staves, and here the Wheel,
And here is the one-eyed merchant, and this card,
Which is blank, is something he carries on his back,
Which I am forbidden to see. I do not find
The Hanged Man. Fear death by water.” -T. S. Eliot, The Waste Land

The Empress who represents prosperity and sexuality, Wheel of fortune which embodies the inevitability of fate, and the Hanged Man who symbolizes self-sacrifice can change their meanings over time, shaped by each era’s culture and the needs of individual users.

One of the first known fortune-tellers to have used Tarot cards is Alliette from Paris. He designed cards that showed possible future events such as travel, sadness, love and fortune. This could be traced in modern-day fortune-tellers who use tarot in place of tea-leaves readings; tarot holds a certain allure of different interpretations that make them appeal to a wider base of people.

Most card readers recognize that the associations and preconceptions of the person being read for are just as important as the actual drawings on the cards. Divination cards offer a way to project certain ideas, whether subconscious or not, and to toy with potential outcomes for important decisions. Like scenes from a picture book, the best illustrations typically offer clear visions of their subjects with an open-ended quality, as though the action is unfolding before you.