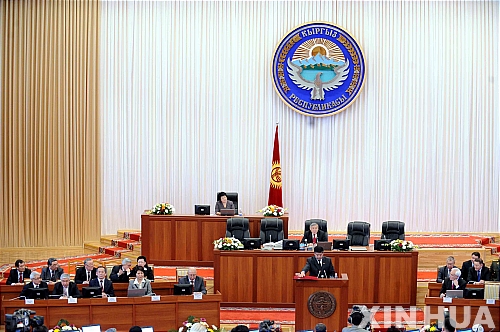 In Kyrgyzstan, a debated draft bill concerning the media came into agenda.

The Kyrgyz Parliament has prepared an initial approval to a bill banning foreign individuals and organizations from owning and establishing media outlets in the country.The proposed legislation also bans domestic activities of media outlets financially supported by foreign countries.

A group of MPs of the Jogorku Kenesh (the parliament) wrote the sections relevant to the media. According to the MPs the document primarily targeted security. The draft law on restricting foreign funding has caused harsh discussions in the parliament and also among civil society activists. Many journalists saw the document as suffocating the freedom of speech in the country.

According to the initiators, all countries naturally protect their media space and Kyrgyzstan should not be a platform for the celebration of terrorist acts with the help of information technology. One of the initiators, the MP Kozhobek Ryspaev said that the bill aims to protect internal and external security while speaking at a meeting of the parliamentary session. A group of MPs declared that they are not going to strangle freedom of speech.

“All we’re talking about is the power of information. We speak about the information wars. The draft law refers only to television because TV is the biggest force today. According to opinion polls, the proportion of TV’s effect is still high-more than 90%. Our bill aims solely at protecting the national interests of Kyrgyzstan. We all see that the terrorists and their supporting structures are very rich. They will find it easy to buy not just one, but a lot of channels. How many wars and how much blood is on their conscience! Even in the United States, foreigners are allowed to own only 25 percent of the TV channels. And in France – only 20%,”- said MP Kozhobek Ryspaev.

The MP made it clear that after the finalization of the bill, it mandates that citizens and legal entities of Kyrgyzstan must own at least 65 percent of the shares (stakes) of the television broadcaster. “And foreigners will not have more than 35 percent. That is, not enough to control the Kyrgyz people, but foreign partners can protect their investments with their blocking share,” said Kozhobek Ryspaev. He referred to the State Agency for Communication’s 19 licensed operators of cable multi-channel broadcasting. “This means that if each package includes 200 channels – the total number of channels will easily exceed 4000, and the number is constantly growing! And we should know that the owners of the broadcasters will feel responsible to the Kyrgyz people. This is for the security of our country,” summed up the MP.

But despite such arguments, some MPs are against the bill. For example, according to the MP Zhanar Akayev, the document will not bring anything good to the media. Speaking at a meeting of the parliamentary session, the MP has assumed that the bill can be copied from other countries. MPs also called on their colleagues to pay particular attention to this initiative. Akayev questioned the initiators: “You say that the bill is necessary for the security of the country. Did you conduct a study in which media financed from abroad, threatens the country’s security? We show such channels as Euronews and ORT. What will happen to these channels? Two times the media community held meetings on the subject and said that none of their proposals have been taken into account. Isn’t this document 100% copied from the Russian law?” In reply, the initiators said that they relied on international experience and not a disordered draft bill from Russian colleagues.

Many experts point out that draft bill is “raw”. According to them, there are many ways to get around it. They ask if that is the case why to pass this law and create the image of Kyrgyzstan as a totalitarian country in front of the world community, where tough laws are stacked against the media?”

A human rights activist Dinara Oshurakhunova, predicts that such bills are aimed against freedom, and there will be much more. “If this does not pass, they will initiate another and another. This bill is directed against the independence of the media. As a result, all media will depend on public funding.With a lean budget, we can lose a lot of newspapers, websites, and TV.These media outlets will go into private hands, and the oligarchs, who can pay will call the tune. Media space is narrowed considerably,”says the human rights activist.

Media representatives staged a rally outside the White House to urge MPs to reject the document. But it did not help. The media community continues to ask MPs give up their ideas and stop supporting the limitation of the media, (at least, before the adoption of the Information Policy Framework.)

Even many lawyers say that the bill is contrary to certain provisions of the law, in particular, the bill may contradict laws “On the protection of the rights of entrepreneurs,” and laws “On investments in the Kyrgyz Republic.”

“In accordance with these laws, the state guarantees entrepreneurs, regardless of their form of ownership, equal rights and opportunities for access to financial resources. The state must also provide a fair and equal legal status to any investor and promote the protection of investments and the development of competition,” lawyers say.

Although the document was passed by the parliament at first reading, the bill will be reconsidered by the Jogorku Kenesh because of the protests. According to some reports, a group of MPs who initiated the bill plans to ease some of the languages in the document.